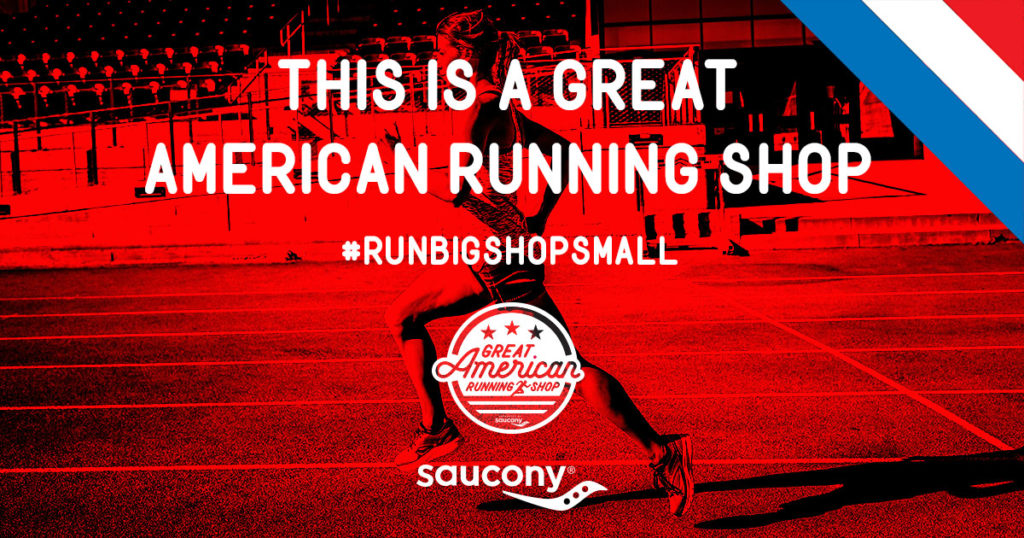 Remember that day after Black Friday called Small Business Saturday? That one day where the world is reminded how amazing shopping locally is. Saucony is taking it to the next level during the entire month of July with their Great American Running Shop initiative.

Did you know Saucony turned 120-years-old this year? Did you know that Run For Your Life is turning 30-years-old next year? That’s a lot of brand history, with many stories that come with it. We want to tell you one in particular though – the early days of Run For You Life and where exactly we came from. This will be a multi post story, but we’re starting with words from our founder, Larry Frederick:

When I left my job as a management trainee at Remington Arms in Ilion, NY in 1982 to take a job in Franklin, Ohio managing an Athletic Attic there, little did I know that I would some day own my own specialty running store that was to become Run For Your Life. By 1982 I had been a competitive national class marathoner for over 9 years, with a personal best of 2:20.34 at Boston. I was interested in learning how to be successful at a business that would provide the latest equipment for the sport I loved as well the ability to provide racing advice and opportunities to other athletes.

In addition to my marathon racing experience (running over 65 marathons by 1982), I was also race director for numerous races and had organized, certified, and directed a marathon. My dream was to qualify for the Olympic Trials and perhaps qualify for our US team. Well, that never happened. I always seemed to be seconds away from the time needed.

I was only in Franklin, OH for 6 months before I was transferred to a larger store in Columbia, SC. I moved to Columbia with Patti Altieri and there we met many new runner friends, I was elected president of the Columbia Running Club, and was race director for several races there. With my new wife Patti as a co-manager, we were so successful, that Athletic Attic transferred us to Fairfax, VA where we continued our success. We were named Co-managers of the Year in 1987 and doubled our stores sales in two short years. In Virginia, I was elected President of the Reston Runners and I continued to gain expertise at race direction.

It was time to open our own store and after some research into Specialty Running Store franchises, we decided to open a Fleet Feet Sports, and that Charlotte, NC was where we wanted to be. So, in September of 1989, with a loan from a personal friend, Patti and I, with our new-born daughter, Jordan, literally blew into Charlotte with Hurricane Hugo, with hopes of success in our own business.

We decided on a location in the 1400 Block of East Boulevard at the Shops at Twin Oaks, near where Starbucks currently resides. I personally designed and up-fitted our store and on December 1, 1989, we had our Grand Opening.

Sales were slow those first few months as we advertised and met the local runners. We had a celebration and Bill Rogers came and led a run from the store. I had an opportunity to open a small store in the Dowd YMCA and the sales and connections that we made there saved us, except for the fact that we had 8 break-ins over the next 18 months at our East Blvd location.

In 1991 we moved the store across the street to 1412 East Boulevard where we were able to provide the store with more security and the break-ins finally stopped. Our sales increased and I was elected President of the Charlotte Track Club. In 1994 I decided that it was time to expand further, so we opened another Fleet Feet Sports, out past the Arboretum on what was then Providence Road Extension. We now had three locations and managing all of them was more difficult than we imagined. The one good thing that happened during this time, was that Tim Rhodes came in our Arboretum store. After several conversations about how to improve the running and racing community, Tim and I published what was to become the Run Charlotte Race Guide. Now, races spread out and were flourishing and running opportunities in Charlotte were at an all time high.

In 1996, struggling to make franchise payments as well as pay back my partner, I decided to buy out my franchise agreement from Fleet Feet Sports, and rename our store “Run For Your Life“. This was the best thing that I could have done. Within 3 years, even though I had closed the Arboretum store, we had doubled our sales, and were selling over 10,000 pairs of shoes a year.

In 1999, the race scene was increasing in Charlotte, and Tim’s race timing business took advantage of the newest technology in the chip system. It was time for a larger location so we moved to the former True Value on Park Road. In the meantime, I had opened a Run For Your Life in Greenville, SC, to be run by a running friend from my days back in New York. I consequently sold that store in 2001.

In 2001 I decided that it was time to move on and find another career, and sold the store to Tim. I am so proud of the store that Patti and I brought to Charlotte, and of the honors that Tim and all of the staff have brought to our original idea of providing running gear and promoting “Run For Your Life”.

And, that’s where we’ll stop this time. More to come from 2001 and beyond from Tim Rhodes and Chris Elkins!